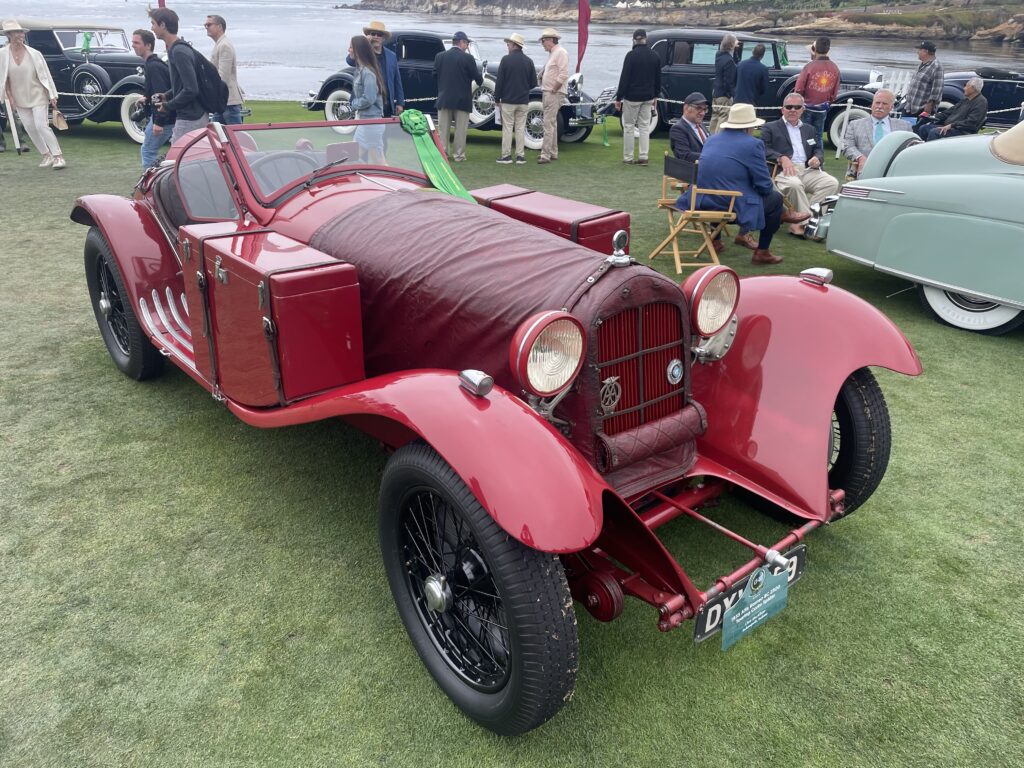 I came across this 1933 Alfa Romeo 8C 2300 Corto Spyder at the 2022 Pebble Beach Concours, and was taken aback by its features and beautifully aged finishes. Upon leaving the field that day, I had a desire to know more about this unique short wheelbase Pre-War sports racing Tour de Force, and so I naturally looked to friends for the chassis number. 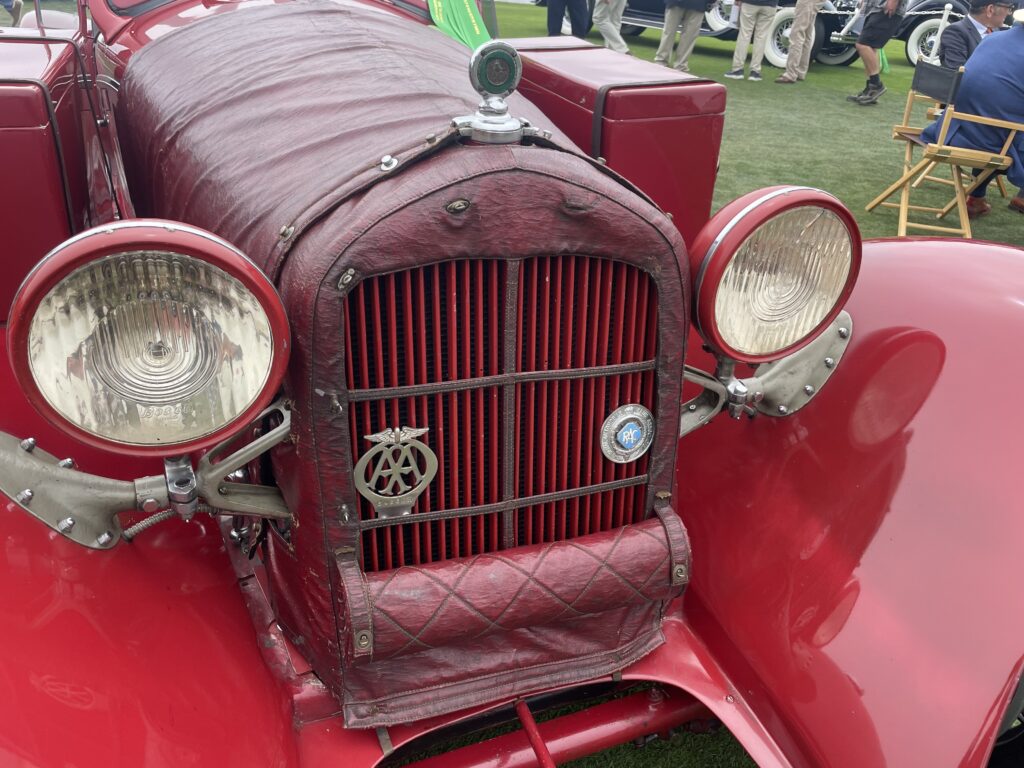 Within a few hours and through a short conversation with a very young and knowledgeable authority on these and other Italian sports racing cars, I was relayed that the chassis number originally assigned to this automobile was Chassis no. 2211107. The Italian word corto means “short”, this was the ideal racing chassis in the early thirties for events like the Mille Miglia and Monte Carlo Rallye. This 8C received a unique body by Carrozzeria Touring and upon completion was register to the Alfa Romeo Works racing team. 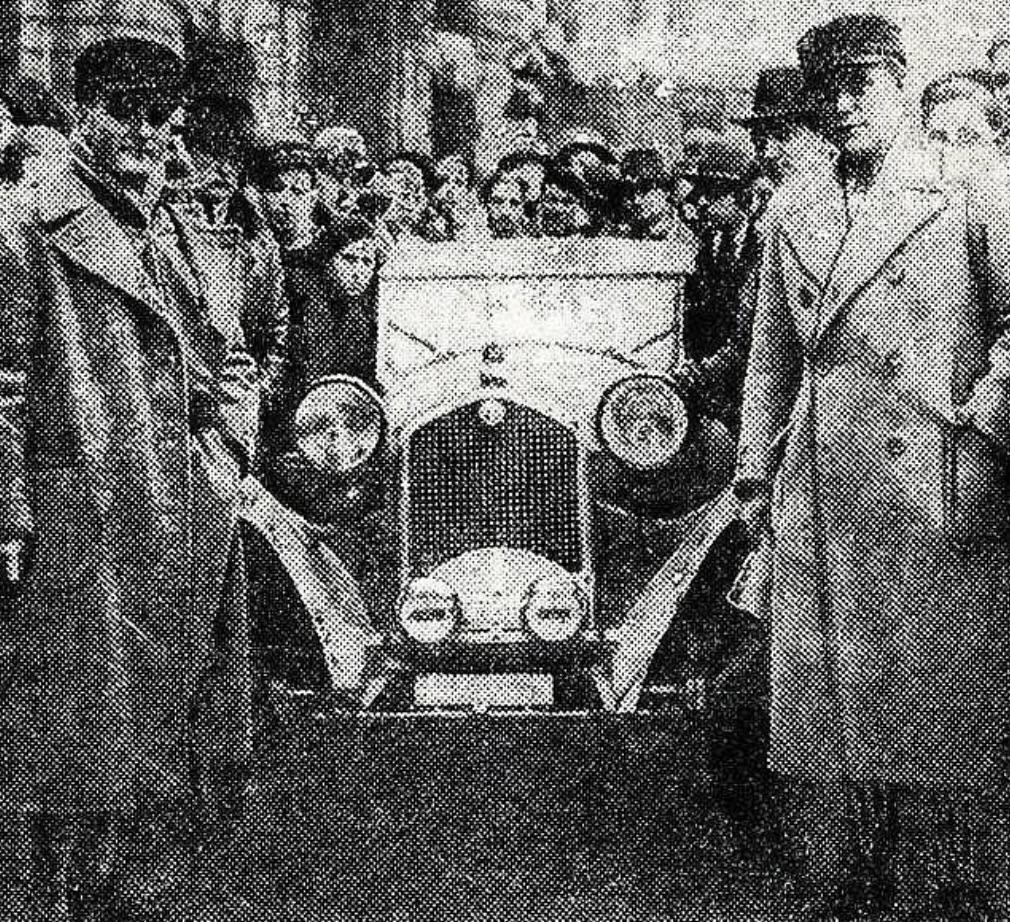 Speaking of the Monte Carlo Rallye, this chassis participated in the 1935 running of the event, driven by Luigi Chinetti and Jean Trevaux. Luigi Chinetti’s name should be familiar to readers, as he was later responsible for the majority of early competition and sports Ferraris imported to the United States, but prior to that he was a driver and dealer of Alfa Romeo automobiles. Back to Monte Carlo, the car was running a highly unique top, which had bows and fabric lining like a folding soft top, yet exhibited shell-like features, as if it were rapped aluminum. In the final stages of the great race upon the hills of Monaco, and leading, Trevaux spun the Alfa and the front end was damaged, rendering any chance at a finish unrealistic. The picture shown below is evidently the result of the spin, the unique looking removable top, and seductive cut of the original rear fenders can be seen in plain view. 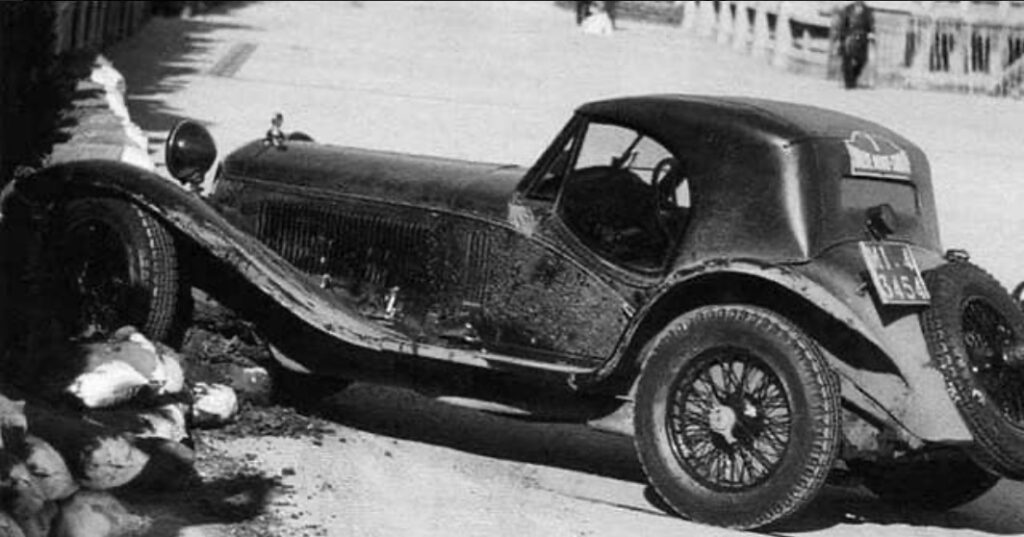 After this racing effort, 2211107 left the ownership of the factory Works, and by the end of 1935, it was delivered to it’s Hungarian owner. Sometime between 1935 and 37 Giacomo Brenta of Budapest took possession of the car. In April of 1937 the Corto chassis 8C graced Alfa Romeo works once again and was mechanically reveiewed, ensuring is roots style supercharged dual overhead-cam inline eight cylinder engine would be in top fettle for its next owner, Italian ice merchant Signor Giulio Rimoldi. Rimoldi was a British Domicile and therefore the 8C was imported to the United Kingdom and shipped upon the SS Tonbridge. 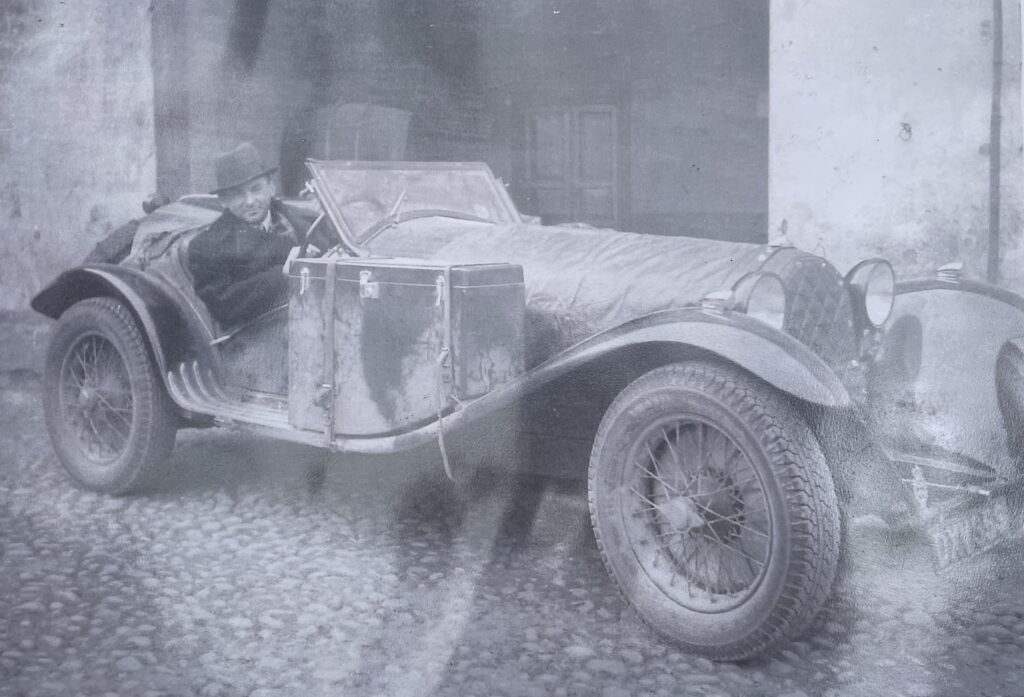 Rimoldi would go on to own and cherish the 8C for over five decades. As he regularly used the short Spyder for trips about the Alps, some modifications were made for this use case. A custom leather bonnet cover was sew to fit, and had a diamond-stitched section which could be rolled over the grille. Amazingly, this piece still survives in the car today. Two large luggage cases were affixed to the front fenders, and they too are retained. Another interesting modification, which was executed in 1950, was the removal of the rear hatches, this, combined with sectioning down the fuel tank, allowed room for child’s seats to be fitted. One does wonder what this would look like, and how incredible it would be to bear witness to this exciting 8C driving around the Alps in the 1950s, with four occupants aboard! Rimoldi retained his stunningly original and unique 8C until his passing in 1988, and subsequently the auto has graced the hands of three enthusiasts who have used it in historic rallying events like the Monte Carlo Rallye Historic and Mille Miglia. 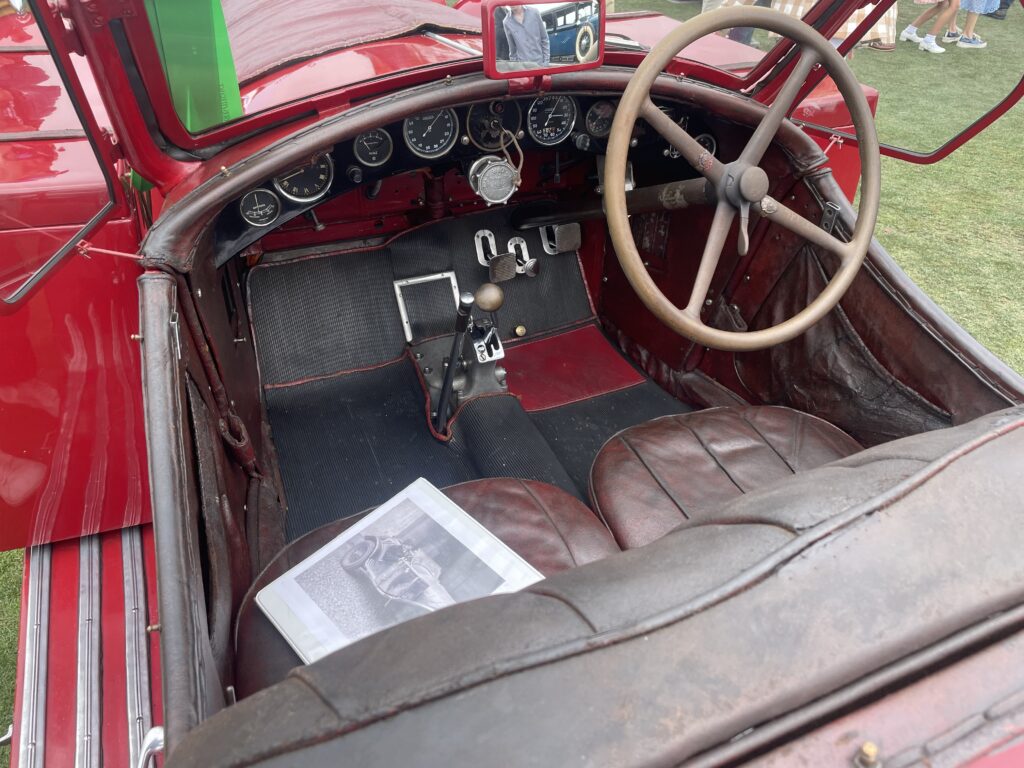 Taking a glance into the cockpit, this chassis exhibits such honesty. Perfectly worn seats and door cards mesh so seamlessly with knobs, gauge surrounds, and faces which have simply been kept clean over the last seventy years, rather than being restored, much like the rest of the car. 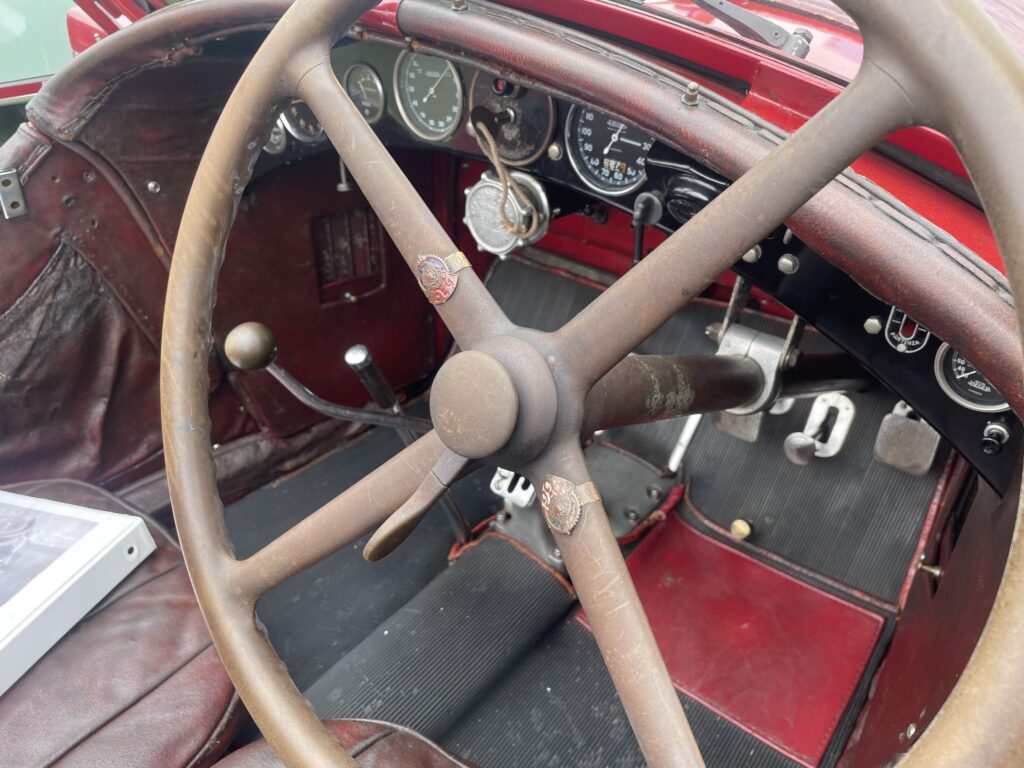 These tags are very interesting, they are Reale Automobile Club d’Italia registrations from both 1936 and 1937. I find these intriguing, having archived some cars which were delivered to the Italian Market in this era, I have seen the papers related to these tags, but never the tags themselves. The purpose of these and their corresponding documentation is what is contemporarily known as a road registration. it makes sense that it would receive a take in 1937 and be exported to the UK later that year, the ornate and weathered look of these makes them so compelling to gaze upon. 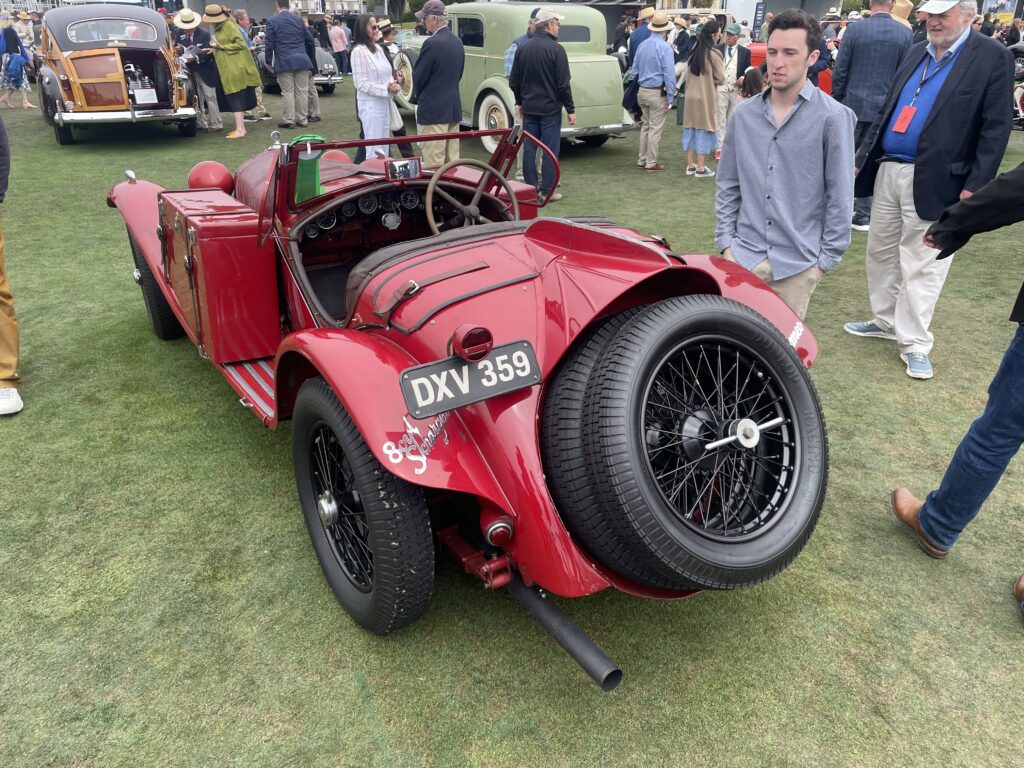 It was a true pleasure to be in the presence of such and storied and well preserved automobile, and a delight to know that its owners piloted such an important Alfa on the 50 mile tour a few days earlier. I yearn to experience pre-war racing cars, and this would certainly be at the top of the list.